Prosoft-Systems marked the beginning of 2019 with the symbolic release of its 2019th emergency control automation complex, the MKPA.

MKPA is a reputed domestic-made emergency control package, developed by engineers of the Ekaterinburg-based company in 2001.

The MKPA controls the electrical network operating modes and implements any standard and non-standard local automation algorithms, such as liquidation of the asynchronous operation, equipment overload protection, undervoltage protection, overfrequency protection, line tripping identification, and more. The complex is designed to upgrade and replace the existing emergency control switchboards of high-voltage lines and substations of 110 kV and above.

One device can perform several EC functions at once. The customer makes the choice based on the design requirements or considerations of placement and connection with external links.

The MKPA device uses standard, PJSC Rosseti-certified algorithms and functions. Also, it has an open, accessible architecture for developing EC algorithms, including freely programmable logic with a number of logic elements, which allows users to adapt standard algorithms to the features of a power facility at the design stage.

Among the other advantages of the complex, the MKPA can be integrated into the facility's process automation system according to the standard protocols for transmitting and receiving data: OPC DA, IEC 60870-5-104, and IEC61850.

Over the course of its 17 years of uninterrupted operation, the MKPA has proven to be a reliable, highly sought emergency control device, not only in Russia but abroad as well. During this time, these devices were installed at more than 450 power facilities across the country, as well as at substations and, hydro- and thermal power plants in Kazakhstan, Georgia, Azerbaijan and Tajikistan. 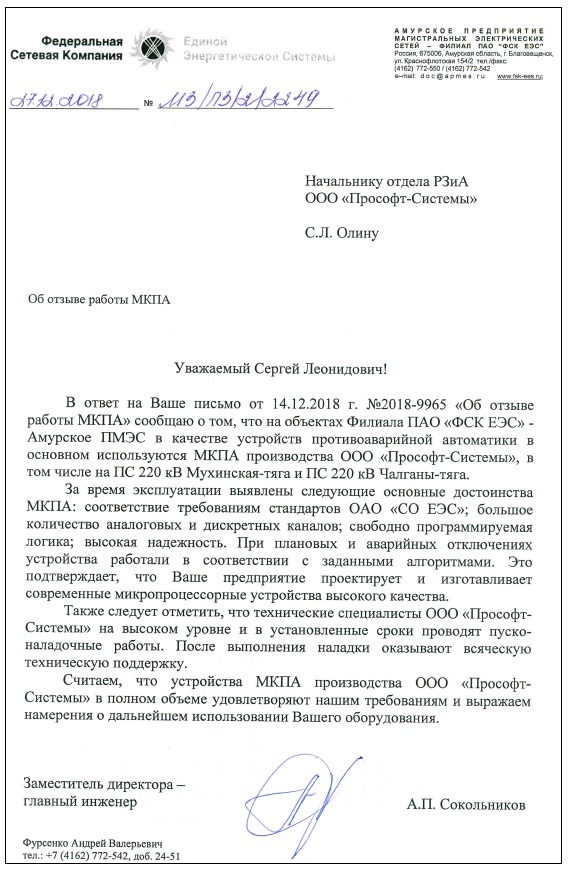 One of the most recent reviews on the MPKA's performance came in the form of an official letter from a branch of FGC UES PJSC, Amurskaya EMPN, at the end of December 2018.