The fault recording system is intended for measuring, computing, archiving and supplying electrical parameters of electrical installations in the normal operation and emergency modes. This information`s analysis allows to identify an emergency`s cause, assess the correctness of operation of relay protection and SIPS devices, and develop a set of measures to prevent any further development of the emergency mode.

The RES-3 recorder is a microprocessor-based device that has a modular structure. The type and range of its modules is determined at the engineering stage in accordance with the technical requirements of the facility where it is meant to be implemented. RES-3 are installed in premises intended for installation of relay protection devices: relay cabinet / room (RCab) or main control cabinet / room (MCCab). Analog circuits of RES-3 (TI) are wired to measuring voltage and current transformers (VT and CТ), external measuring transducers.

RES-3 registers binary signals (TS, TE) received from relay protection and automation devices, from cabinets for SIPS of electrical equipment, directly from the switching equipment (SE), and from the emergency signals and commands transmission devices. The RES-3`s activation for obtaining oscillograph records of electrical parameters of an emergency mode is effected on the basis of variation of values of analog input signals compared to the setpoint, and of variation of status of one or several binary input signals.

Types of data that RES-3 uses for data presentation:

The fault recording system server`s principal functions are as follows:

The universal time system supplies the RES-3 with accurate time stamps for recording the electrical parameters with an accuracy of at least 1 ms. This property allows to analyze information from several RES-3s not just from the same facility, but even from RES-3s of different facilities. 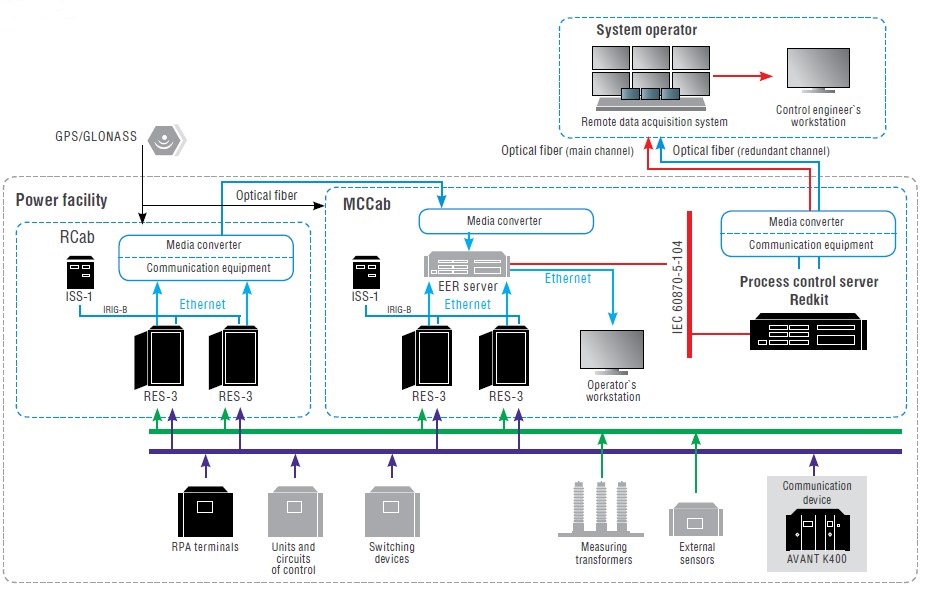