The special load shedding automatics (SLSA) functionis intended for maintaining a load area stability under emergency disturbances, such as disconnection of one or more supply lines. Moreover, the SLSA function serves for eliminating any overload of remaining connections between the area it supervises and the external power grid. The SLSA manages the load area via selective consumer shedding. The creation of a SLSA system requires organizing a distributed hierarchical structure
of SIPS controllers with the UPAE at its summit. Local SIPS devices, such as ТPА-01, within the SLSA complex serve for implementation of commands of the «load shedding» (LS) and «load initiation» (LI) type that come from the UPAE, as well as for generating the network element status (repairs/engaged) signals and computing the overall load of substations.

Quick-operating LS signals are sent to ТPА-01 via the commands transmission devices (AVANT K400) network, while non-quick-operating LI signals initiated by the staff, TS and TI between devices are transmitted over the Ethernet using the IEC 60870‑5‑104 protocol. A separate daily load schedule can be provided in the UPAE configuration for each substation, since each substation has its own value of base load. The daily load schedule defines coefficients and hourly coefficients for each substation. This allows to control the load in a more flexible way while maintaining the stability of the area. On account of the flexible programming of SIPS devices it is possible to use the UPAE as a part of the system stability disturbance prevention
function intended for maintaining the stability of the external grid via disconnection of elements of open switchyard of a combined heat and power plant (as shown in Fig. 1) in case of emergency disturbances in the external power grid. In the absence of triggering commands from the UPAE the ТPА-01 devices can effect the local SIPS functions at their own level, such as undervoltage protection, underfrequency protection, etc. 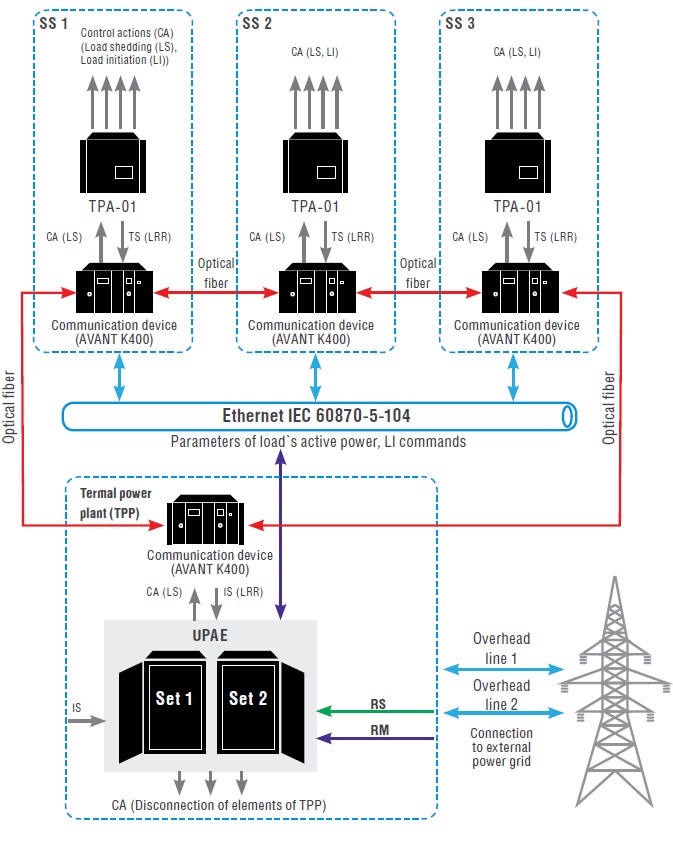