A special version of the AVANT K400 transceiver is used for transmission of RP and SIPS commands over digital communication channels.

Moreover, the communication can be carried out either over dedicated fiber optic communication lines or over the specialized C37.94 optical digital interface, which is intended for interfacing with multiplexers that have a similar interface.

The AVANT K400 transceiver in its digital version can send and receive 32 commands, has two slots for arranging two independent transmission/reception channels, each of which can work over a dedicated FOCL or via the C37.94 interface.

The AVANT K400 transceiver in its version for digital channels allows to implement various connection arrangements for full-duplex transmission of RP and SIPS commands over FOCL, such as point-to-point, point-to-point with redundancy, bidirectional ring, and point-to-multipoint simplex channel with redundancy (Fig.1, 2, 4). In the latter case, a splitter-repeater is used as an optical splitter.

The SFP module is to be chosen by the manufacturer or clienton the basis of the optical line`s length, type of optical fiber and number  of fibers used to arrange the duplex communication channel.

Based on the AVANT K400 transceiver, it is possible to arrange combined RP and SIPS digital communication channels over different transmission media, subject to one slot operating over the dedicated FOCL, and the second one operating over multiplexed channels (Fig. 3).

Figure 1.
Duplex transmission of 32 RP and SIPS commands over a dedicated FOCL channel with optional redundancy

In the case of implementing sophisticated arrangements of communication channels of the point-to-multipoint type withredundancy it is possible to use the AVANT K400 transceivers, connecting them to the multiplexer via the C37.94 interface.

In order to create multiple destination for a particular command coming from this or that point, additional routing is effected in the transceiver at an intermediate point. The corresponding delay shall not exceed 0.3 ms.

Fig. 5 presents an example of implementation of a bidirectional ring with routing. A Package in the C37.94 format is generated in the transceiver at each of the ring’s nodes, and the multiplexer delivers it to the next point where the Package is unpacked and those commands that are intended to be executed at that point are extracted from it. The remaining portion of the commands is packed together with the commands that have arrived to this point, and the package is sent to the next point along the ring. Thus, the RP and SIPS commands can enter the ring at any point and exit it simultaneously at several points, in any combination. In this case, each individual communication device can issue up to 32 commands to the general flow and receive from
it up to 32 commands of any kind. The total number of commands in every direction amounts to up to 96.

The time of transmission of a command from one point to the next amounts to 7 ms, while the additional transit through an extra multiplexer adds around 0.4… 0.6 ms.

Figure 5.
Example of implementation of a bidirectional ring with routing 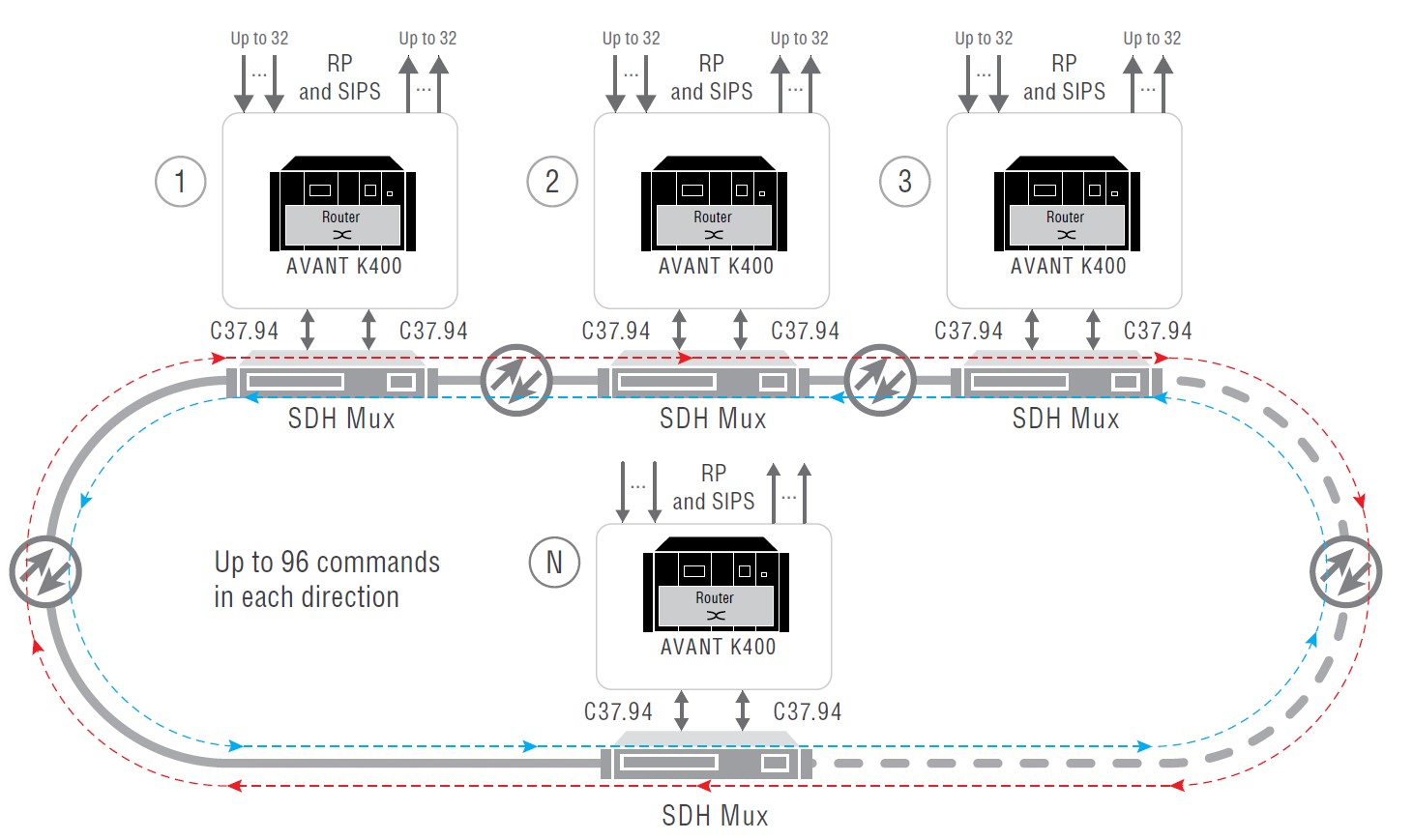 A ring can be arranged over a dedicated FOCL in the same manner (Fig. 6). In this case, the transmission of packages along the ring is entrusted to the AVANT K400 transceiver itself. The time of transmission of a command from one point to another amounts to 7 ms, while the additional transit through the AVANT K400 adds another 0.3 ms.

Figure 6.
Example of implementation of a bidirectional ring over a dedicated FOCL 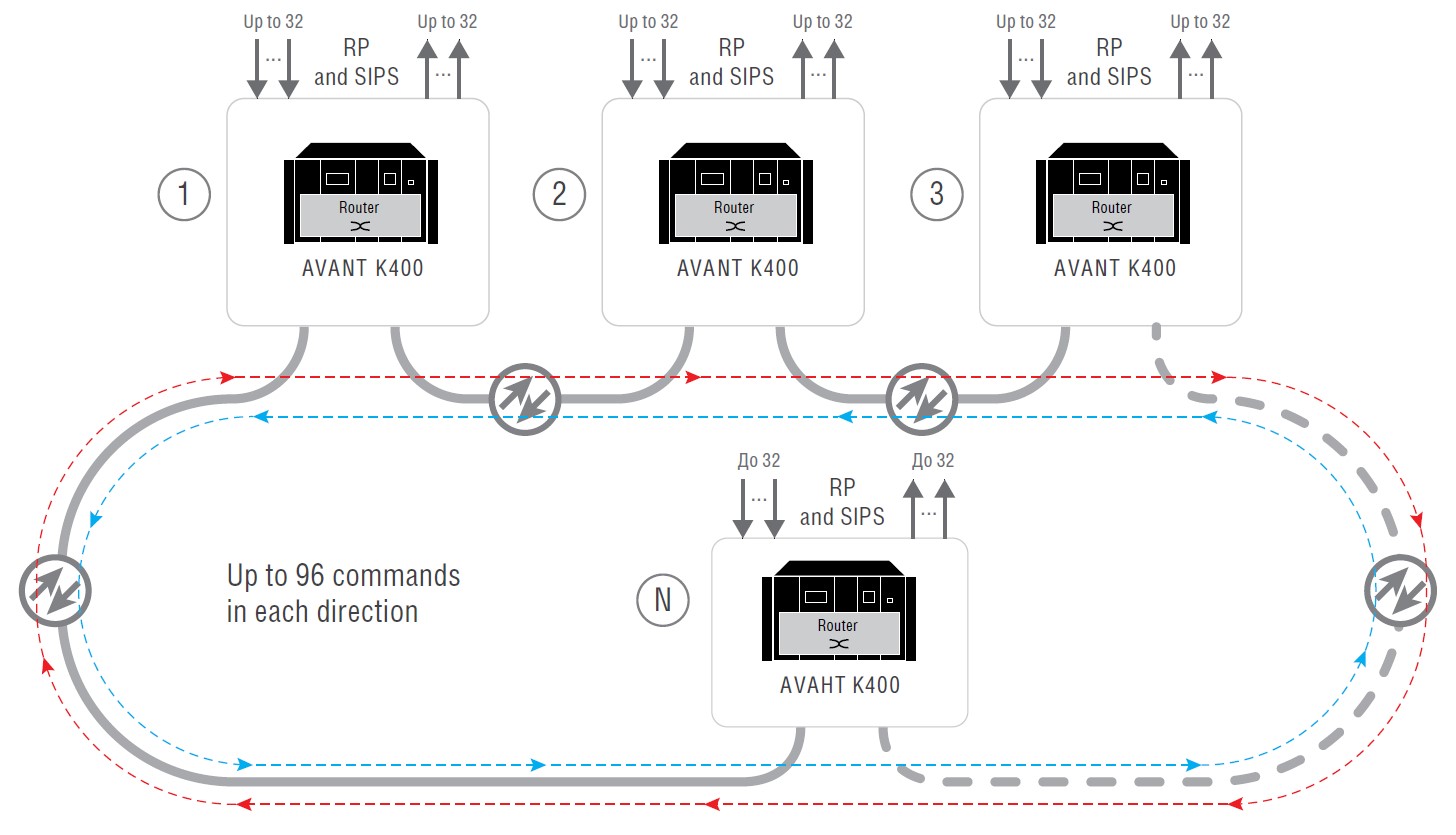 The ring can also be arranged by combining multiplexed channels and dedicated FOCL (Fig. 7). In this case the multiplexers are installed only on those nodes, between which it is necessary to transmit some additional data besides the RP and SIPS commands. 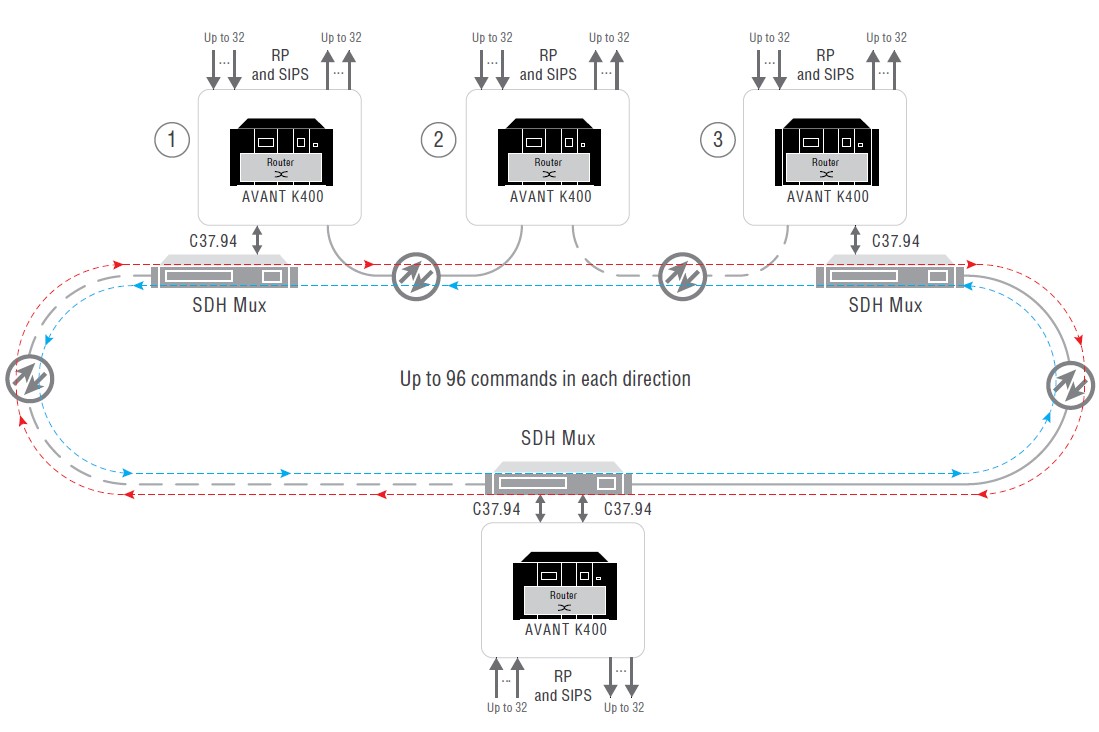 Wave division multiplexing can be used in a number of digital channel solutions in order to save the optical fibers (Fig. 8). Communication devices operating at different wavelengths are combined in a wave multiplexer (CWDM / DWDM) and are transmitted over the same fiber to a similar device, where the reverse wave separation is effected. Moreover, the connection between CWDM-multiplexers can be arranged over a single fiber.

It is necessary to implement in each of the communication devices an SFP module that effects the transmission and reception at the corresponding wavelength.